Chairman, Dr. Anne Mungai delivered a report regarding the State of UREAG.

Highlights included an overview of Standing Committee responsibilities, membership recruitment, and Needs Assessments.  The Vice Chairman, Dr. Anize Appel gave an overview of the travel Awards application process and encouraged members to share their experiences with other scholars.  Vice Chairman Appel also reminded awardees of the travel grant to submit the required report to complete the obligation for receipt of funds.

An Election was held as per Committee Constitution to replace the vacated position of Vice Chairman.  Dr. Anne, Mungai was elected to the Board of Directors for CIES and as per committee Constitution, the Vice Chairman, Dr. Anize Appel ascended to the position of Chairman.  Dr. Appel will complete the remaining 1 year term (2017 and 2018)  of Dr. Mungai and will be eligible to serve the two year term as Chairman ascent to begin in 2019.

The floor was opened for nominations.  Dr. Pavan Antony was nominated to serve as the Vice Chairman. Dr. Antony spoke  about why he desired to serve in the role of Vice Chairman.  As he was the only nominees, he was duly elected by acclamation.  The returning officers for Publications, Dr. Steve Azakai, Secretary, Oscar Parra, and Historian, Meghan Chidsey were re – elected by acclamation.

The Constitution committee moved to change the name of the UREAG Constitution to UREAG Bylaws and Standing Rules.  Motion Passes (Unanimous)

The Bylaws committee moved to rewrite the Bylaws as is described by Robert’s Rules of Order Newly Revised (RONR) to include Name, Objective, Members, Officers, Meetings, Committees, Parliamentary Authority, and Amendments.

The Bylaws committee moved to add ” or through electronic ballot” 4. Decisions on UREAG Committee Leadership members with the exception of the Chair will be made by simple majority vote at the UREAG Business Meeting (UBM) held annually during CIES Conferences or through electronic ballot. In the event of equal votes, the decision of the Chair is final.

The Bylaws committee moved to Strike Section “e” from Bylaws e) Reasons for such dissolution may include the issue of underrepresentation becoming redundant within CIES (which seems unlikely), lack of interest among UREAG or CIES members, or difficulties within the UREAG Committee.

Meeting was adjourned at 4:35 PM by Dr. Anize Appel

Dr. Mungai is a Professor of Education, Chair of the Curriculum and Instruction Department and Director of the graduate Special Education program at the Ruth S. Ammon School of Education, Adelphi University, New York. Her research agenda over the last several years has revolved around the concept of multicultural issues, Special Education inclusion issues, staff development, gender issues and learning. She is the author of the book Growing up in Kenya Rural Schooling and Girls  published by Peter Lang publishers, the co-editor of the book  Pathway to Inclusion: Voices from the Field published  by University Press of America, and co-editor  of In the Spirit of Ubuntu” Stories of Teaching and Research published by Sense Publishers. She has published articles on Multicultural Education and issues of Special Education Inclusion. She is the Vice-President of Caroline W. Mungai Foundation.

Dr. Perry Greene is Vice President for Diversity & Inclusion at Adelphi University, where he is also an associate professor. Prior to his present position, Dr. Greene served as Associate Provost for Faculty Affairs & Institutional Diversity. As the chief diversity officer, Dr. Greene believes that promoting diversity and inclusion requires institutions of higher learning to be innovative and proactive in their effort, He received his Ph. D. in English Education from New York University. Dr. Greene’s research interests are in the areas of teacher preparation, social justice, diversity, and the education of urban youth. Recently published articles include “Embracing Urban Youth Culture in the Context of Education (Urban Review) and “Teaching Race: Making the Invisible Concrete” (Teaching Race in the 21st Century). He has presented on these issues at professional conferences.

Mohamed A. Nur-Awaleh, Ph.D. is an Associate Professor of governance, organization, leadership and comparative higher education in the Department of Educational Administration & Foundations Illinois State University. He is also serving as the Chair of Joyce Cain Award of CIES.

We are pleased to announce the 2017 CIES UREAG Travel Award for both International and National attendees. This travel award is given to help those who have financial need and encourage more participation in the CIES conference. Several awards of $ 400 (International travel) and $250 USD each will be awarded for travel to CIES 2017 in Atlanta. All members of UREAG eligible to apply but preference will be given to those who have not received an award before.

Applicants must attach a letter show that their proposal has been accepted. You may also apply for the 2017 CIES International Travel Award. Please check the website for details. Please note that you may only receive one award from CIES. Please apply by December 15, 2016.  This year’s travel application 20172017-ureag-membership-travel-grant-application-form is available here.

All applications should be sent to Anize M. Appel  email aappel@northampton.edu and cc to Oscar Espinoza Parra  at email oscareparra@gmail.com

Where do we begin?  The fabulous Reception?  The thought provoking business meeting?  The dynamic all Day Global Village symposium?  The candid counsel with the academe “elders?”  The delicious breakfast?  The engaging presentations?  The travel grants?  The opportunities to connect with other scholars along the journey?  Or maybe, it is simply being able to have  a voice?  Check out a few pictures of our activities in the album.

Thank you for attending our UREAG Business meeting and participating in the election of new Officers for the 2016-2017 year.

We have a great team who are ready to expand opportunities for UREAG members and improve the overall experience for all members of CIES! 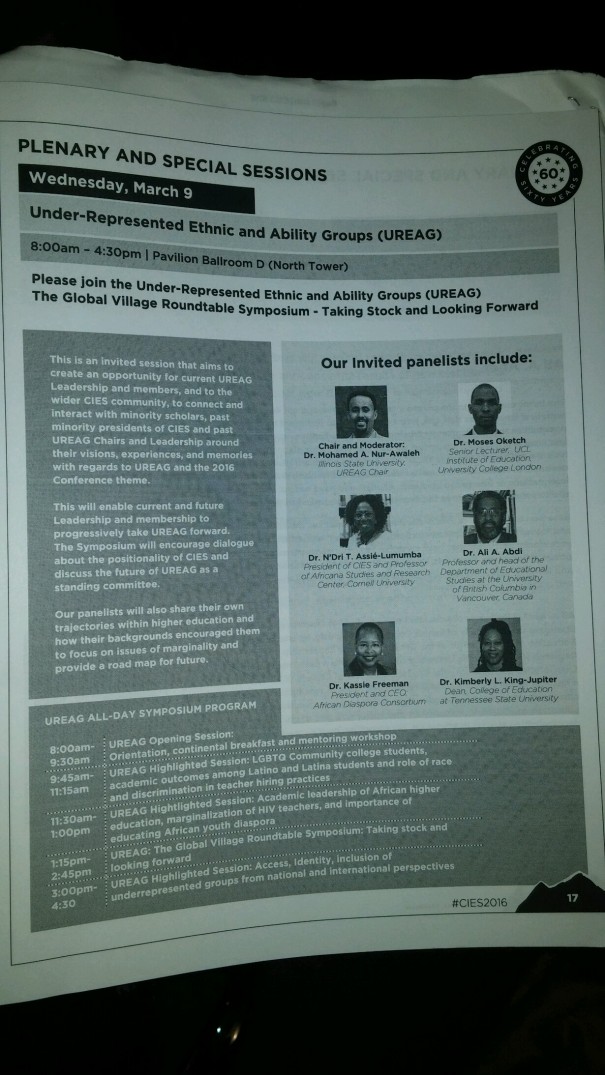 Maurice Sikenyi is from Kenya. He is pursuing a Ph.D. in Comparative and International Development Education at the University of Minnesota, Twin Cities (USA), where he is a Fellow at the Interdisciplinary Center for the Study of Global Change (ICGC). He holds a Master’s degree in International Peace Studies from University of Notre Dame (USA), and a Bachelors of Education degree from the University of Nairobi (Kenya). His working experiences have involved teaching, research, and project management in education, peacebuilding, and development. Most recently he was a Research Project Manager for the Kellogg Institute for International Studies. He was also a Fulbright Teaching Fellow at Syracuse University. His research interests broadly explore the intersection of education, conflict, and development in sub-Saharan Africa. He chose the University of Minnesota program because of its blend of theory and practice exemplified through courses offered and excellent faculty research projects that seek solutions to challenging issues of education and development around the world. Additionally, as and ICGC Scholar, he interacts with a community of scholars working on interdisciplinary research on the global south which complements his research focus. The CIDE PhD program at the University of Minnesota consists of a diverse group of students who bring a comparative perspective on issue issues of education and development which has made learning quite enriching. Similarly, the opportunity to enroll in The MasterCard Foundation, Learn, Earn, and Save Initiative, a six year (2011-2017) evaluation collaboration between University of Minnesota and MasterCard Foundation on the impact of non-formal and formal youth entrepreneurship education initiatives on marginalized youth and entrepreneurship in East Africa is refining his mixed-method approaches in education research. At the CIES conference, he hopes to network and gain insights into the recent developments in the field of Comparative and International Education.

Between now and CIES 2015, we will be profiling UREAG members on the website! We want this to be a chance for everyone to get to know each other a bit before the conference. We also hope this will be a chance to hear a little more about the diversity of programs CIES attracts. We’re going to shake the profiles up a bit so that you hear a bit from multiple perspectives. We’re going to start with Cora, coming to us from Cambridge, and who is already in thesis writing mode. Over the coming weeks, we’ll also be hearing from professors, instructors, 1st year PhD students, 2nd year PhD students, brand new doctoral graduates and maybe a researcher or two!

1) Tell us a little bit about your background.

I grew up in a little village in southern China and I received a full-scholarship to pursue my undergraduate studies at the Hong Kong Institute of Education. After graduation I taught English as a second language in secondary schools in Hong Kong. I completed my Master’s degree in Educational Assessment at King’s College London as a British Chevening scholar before I embarked on my PhD studies at the University of Cambridge.

2) Why did you choose Cambridge’s program?

It may be cliché to say so but I was genuinely inspired by a famous Chinese poem titled ‘Saying Goodbye to Cambridge Again’, composed by the talented poet Xu Zhimo (1897-1931). The history of the University, its collegiate system, the international profile of its faculty and student bodies as well as the expertise I could draw upon in the vibrant Faculty of Education were all appealing to me. The generous funding Cambridge provided was also a key factor that enabled my doctoral pursuit.

3) What has your experience been like so far? What types of classes are you taking, what research are you working on, etc?

My experience at Cambridge has been enriching and fulfilling. In my first year of doctoral studies, I took educational research methods classes. I began my fieldwork in the second year and now I am writing up my PhD thesis. In my ethnographic research, I explore the identity constructions of undergraduate mainland Chinese students in a Hong Kong university. I employ Bourdieu’s field, habitus and capital as major conceptual and analytical tools to approach my data.

4) What do you hope to gain from the experiences offered at CIES? (Whether networking, further familiarize yourself with the most recent developments in the field, etc…)

At CIES 2015, my colleagues and I are presenting our research in a panel on Chinese students’ experience abroad, including the USA, Canada and in Hong Kong, which is an intra-nation, but border-crossing case. I look forward to dialoguing with experts and like-minded colleagues in the field and exploring future collaboration opportunities during the conference; I also wish to explore Washington DC and other parts of the USA.

5) What do you hope to accomplish in the field of comparative and international education?

Motivated by my personal experience, my ultimate goal will be to address educational inequalities issues through rigorous empirical research and theoretical engagement.

New Travel Grant applications for the 2017 Conference in Atlanta, Ga will be available shortly.  Stay tuned!

Thank You to Our Outgoing Chair

The UREAG Standing Committee would like to express our thanks to Dr. Mohammed Nur-Awaleh for all of his  work and contributions over the years.

We look forward to furthering our work on equity and inclusion with you.